To learn more about this weekly challenge, please click here.

One year ago today, our empty-nest baby Xerxes passed away due to feline leukemia.  His was not an easy passing, not for him…he struggled so, and not for us…we didn’t want to let him go.

He was diagnosed on 23 September 2015.  He was close to death when we took him in. We initially thought that he was just sad and missing the kids because suddenly it was just David and me here in the house.  Davey had 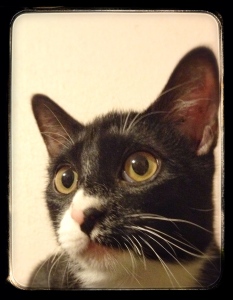 Once he came home, he seemed to be a little perkier, but not quite our little Tasmanian Debil.  He wasn’t running and attacking, but he was able to walk.  Then, he started to get lethargic again. We took him back to the vet.  The news was grim.  They said another transfusion would do him no good.  It would just prolong the inevitable.  He mentioned putting Xerxes down.  We just couldn’t make that decision.  We continued to pray that Heavenly Father would heal him.  We know that He is still in the miracle business, so we knew He fully well could heal Xerxes if He chose to.

He chose to heal him over on the Rainbow Bridge on 19 October 2015.  Xerxes was not alone when he left this earth.  David was holding him as I rubbed his forehead the way he loved so much.  He is not alone now.  He is with his many family members waiting for the rest of us to cross over.

What we don’t understand is why Heavenly Father gave us our empty-nest baby just to take him away so soon and in such an awful way.

We sure miss you, my babykins.

Please be sure to vist David over at Random Thoughts and Observations. Thanks!

I am a South Carolina native, but have been living on the Texas Gulf Coast for 14 years now. David and I have been married for 34 years. Our children are grown. Some are here at home, others are out in the big world doing their "thing". I enjoy genealogy, reading, writing, photography, digital art, fiber arts, cooking and much, much more.
View all posts by Suzanne Gunter McClendon →
This entry was posted in Cats, Grief, Loss, Not-So-Wordless Wednesday, Pets, Rainbow Bridge, Xerxes. Bookmark the permalink.